Melatonin (5-Methoxy-N-acetyltryptamine) is a hormone present in the organisms of all living beings (from algae to humans). It has been found melatonin plays a crucial role in our bodies.

It controls the sleep-vitality rhythm and the related c changes in the secretion of various hormones (cortisol, testosterone, growth hormone).

Melatonin is a fundamental regulator of the cyclical rhythms of the human body. As we already mentioned, melatonin regulates the sleep-vitality cycle and synchronizes biorhythms.

In higher amounts, melatonin is produced by pinealocytes (a type of cells) in the pineal gland (located in the brain), as well as in the retina and the gastrointestinal tract.

It is synthesized from the tryptophan amino acid via the synthesis of serotonin by the 5-Hydroxyindole-O-methyltransferase enzyme. This precise rhythm can be altered if there are abnormalities in the melatonin secretion.

When it is in a sufficient amount, melatonin slightly lowers body temperature – thus, it reduces the consumption of energy and accelerates the regeneration of the cells.

It is suggested that melatonin is one of the most well-known and potent antioxidants, which acts both at the cell membrane and inside the cell.

It has been found melatonin plays a crucial role in our bodies. It controls the sleep-vitality rhythm and the related c changes in the secretion of various hormones (cortisol, testosterone, growth hormone).

Melatonin is a fundamental regulator of the cyclical rhythms of the human body. It shows a 24-hour pattern synthesis and release.

Its natural bioavailability over an extended period of time (5-6 hours) during the night determines the effect on the cyclic system of the biological rhythms.

Melatonin In the Body 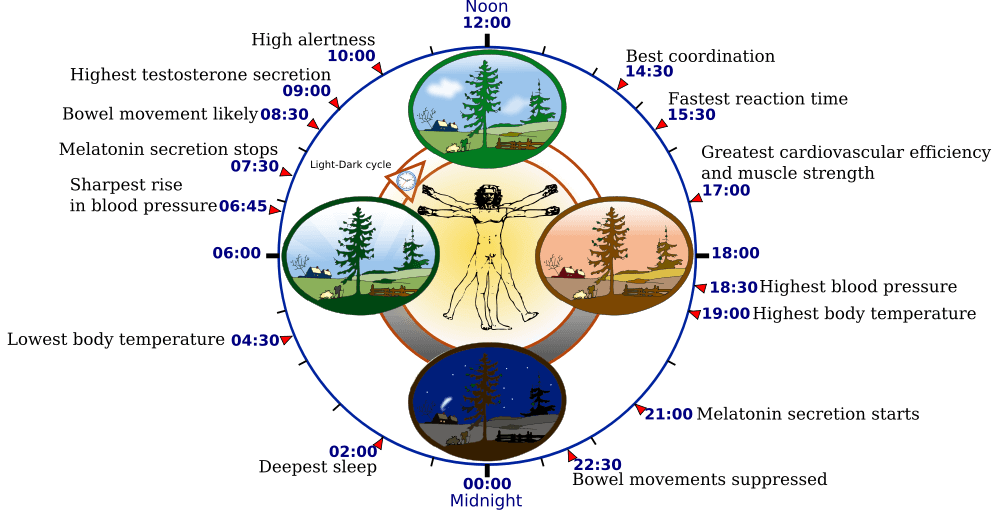 Melatonin is produced in the pineal gland (a small gland in the brain) under the control of serotonin (one of the most important neurotransmitters).

Melatonin appears in the blood only at night and disappears during the day - like a vampire. At dusk, the pineal gland begins to gradually strengthen the melatonin secretion which reaches its peak in total darkness.

The morning light activates the optic nerve, producing a pulse through the spinal cord and the higher conduction paths, and reaches the pineal gland, which blocks the synthesis and secretion of melatonin.

This is similar to the work of a metronome that regulates the activity of the central nervous system. Given continuous impulses through the optic nerve, the pineal gland is able to regulate the activity of various organs and systems and to encourage the switch to "sleep mode" when it is dark.

That significantly reduces energy consumption in the body. Melatonin is a key element in this regulatory mechanism.

As we already mentioned, melatonin regulates the sleep-vitality cycle and synchronizes biorhythms. This precise rhythm can be altered if there are abnormalities in the melatonin secretion.

When it is in a sufficient amount, melatonin slightly lowers body temperature – thus, it reduces the consumption of energy and accelerates the regeneration of the cells that are not active during the sleep phase.

It is suggested that melatonin is one of the most well-known and potent antioxidants, which acts both at the cell membrane and inside the cell.

Through evolution, man has lost the ability to produce some powerful antioxidants, such as beta-carotene and vitamin C in the body, but has kept other antioxidants (for example - melatonin) that inactivate free radicals (greater threat to the body).

Thus, our body forms a powerful defense system. For example, the brain, composed of 50 percent fat, 1/3 of which are unsaturated fats, is very sensitive to free radicals.

Located at the base of the brain, the pineal synthesizes melatonin, which is "the last defensive line" against free radicals that attack the brain. Melatonin lowers the levels of "bad" LDL-cholesterol, protects against cancer, and stimulates the immune system.

The melatonin levels in peripheral blood are different in young people and in adults. It has been shown that with aging, the circadian systems in the human body get "deteriorated".

As with most hormones when aging, melatonin levels decline dramatically: the serum values in an 80-year-old man are only 10% of the values at 20-year-olds. A consequence of this is a significant change in a number of vital parameters.

There is a particularly negative effect on the cycle of sleep - vitality; at night the temperature of adults does not decline, which means that they cannot have the normal restorative processes of tissues and organs.

Melatonin Can Prolong Our Lives

The proper functioning of the internal, biological clock seriously affects the length of human life. Probably the maintenance of circadian variations in melatonin secretion is particularly important for the delay of the aging process.

The activity of melatonin as a drug has been found for the first time in animal experiments - the submission of the hormone has significantly prolonged (by 20-25%) of their lives.

There are a standard and controlled release (slow release) form of melatonin.

Unfortunately, the two forms do not meet the cyclical requirements of the human body, because melatonin has a very short half-life (30-40 minutes), but these forms need to be bioavailable continuously for 5-7 hours from the start until the end of our sleep.

This is necessary for the establishment of a threshold, which for most individuals is 3-5 mg of melatonin orally. The preparation of the chronobiological form of controlled-release melatonin is justified because of the need to:

Standard forms have a limited effect for about 2-3 hours, which leads to long periods of night waking. The normal release and slow-release forms do not initiate and maintain sleep.

Melatonin is not soporific so you cannot get addicted to it - it just syncs biorhythms and ensures a peaceful and lasting sleep. There were no side effects in any of the drug formulas.

Standard forms with normal release do not maintain good sleep and the retard formulas do not support the emergence/beginning of sleep. A new chronobiological adjusted form of controlled-release melatonin is available as a nutritional supplement.

It contains 5 mg of melatonin - 2 mg melatonin with immediate effect and 3 mg, available from the second to the sixth hour after ingestion. Recommendation: a dose of one tablet per day to be taken with a glass of water before bedtime.